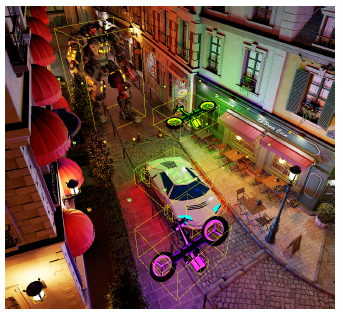 Monte Carlo ray tracing offers the capability of rendering scenes with large numbers of area light sources---lights can be sampled stochastically and shadowing can be accounted for by tracing rays, rather than using shadow maps or other rasterization-based techniques that do not scale to many lights or work well with area lights. Current GPUs only afford the capability of tracing a few rays per pixel at real-time frame rates, making it necessary to focus sampling on important light sources. While state-of-the-art algorithms for offline rendering build hierarchical data structures over the light sources that enable sampling them according to their importance, they lack efficient support for dynamic scenes. We present a new algorithm for maintaining hierarchical light sampling data structures targeting real-time rendering. Our approach is based on a two-level BVH hierarchy that reduces the cost of partial hierarchy updates. Performance is further improved by updating lower-level BVHs via refitting, maintaining their original topology. We show that this approach can give error within 6% of recreating the entire hierarchy from scratch at each frame, while being two orders of magnitude faster, requiring less than 1 ms per frame for hierarchy updates for a scene with thousands of moving light sources on a modern GPU. Further, we show that with spatiotemporal filtering, our approach allows complex scenes with thousands of lights to be rendered with ray-traced shadows in 16.1 ms per frame.

Permission to make digital or hard copies of part or all of this work for personal or classroom use is granted without fee provided that copies are not made or distributed for profit or commercial advantage and that copies bear this notice and the full citation on the first page. Copyrights for components of this work owned by others than Eurographics must be honored.